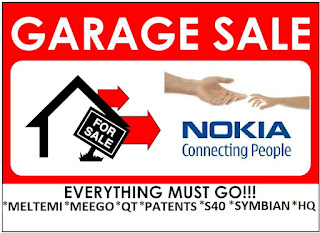 I saw the news late last night, just as I was getting ready to go to bed that Nokia's planning on selling their Head Quarters in Finland and then leasing it themselves, so they are not moving out.
Essentially, just transferring responsibility of the maintenance and running cost of the property to someone else.

So the Garage sale continues; Meltemi, MeeGo, QT, some patents, Symbian and now this.

Putting up for sale its Finnish HQ.
It's not technically a bad idea nor does it spell doom if you are a large company looking to cut cost.
But are they really cutting costs? I would think that companies that own large buildings (HQ or not) usually contract out the maintenance and running cost of that building to a some sort of services company that specialize in that sort of thing.
Nokia selling its building and then leasing it back? it's like taking a loan from bank really, you borrow $10,000 and pay the bank back $1,000 every year, sooner or later you would have spent more than the $10,000 you borrowed in the first place.

So my question is.. Is Nokia really that broke? Surely, they have experts who have sat down and made all the calculations and estimates for this sort of thing and if they concluded that this is the best option, well quite frankly who am I to say its the wrong one.

Besides, investors seem unphased by the news as Nokia stock is up 0.19% (at least it didn't drop).