Hello Everyone… As I promised earlier this morning, I will have a surprise Unboxing for you guys.

Say Hello to my new friend..

Before I start the slide show I just wanted to give my take on my 1st impression on the device. As you may know I have played with this device for the 2nd time now, 1st was in Finland during the Open Lab Event and 2nd was the Nokia NYC Evening with S60 Event.

My 1st impression of the phone was the body was pretty solid, the slider was pretty tight with spring guidance, and it was very thin compared to the N95.

Why? It basically address a lot of issues revolving around the 1st Generation N95, and also granted few consumers requests.

Let me jot those down..

*We thought the N95 was already thin coming from an N80, and now the N85 is more thinner.

*Nokia removed the camera lens cover on the N95-3 which got a lot of consumers furious and Nokia address that on the Nokia N85.

*People complained about how weak the flash on the N95, Nokia implemented a dual led flash on the N85. (Could have been better by putting Xenon Flash)

*People thought the 3.5mm jack was auckwardly in place, Nokia address the issue and put it on top of the phone for easy access.

*Nokia also upgraded the OS to S60 Featured Pack 2 on the N85 which is actually faster than the Featured Pack 1 in terms of UI speed, Camera Shutter, Openning of Applications. (Impressed)

*People complained about Nokia’s lacks of USB Charging, Nokia didn’t just change the charging options, it made it to USB default so you can charge your phone from your Computer through micro USB.

These are just some of the changes from the Nokia N85.

My only biggest gripe was the Directional Pad “aka” D-Pad in which you have to press em a little harder for them function very well. But I guess I can get use to em through everyday use.

So far so good, This phone hasn’t disappointed me and I’m a little impress with the new OS Featured Pack 2. Its kind of like the Vista of Microsoft.

Catch some more updates as I grow and learn more about the device in my everyday use.

I hope you guys enjoyed my Unboxing slide show.. I was planning on doing a video, till I saw my co editor THETRUTH has already posted his unboxing, so to be different I went with the slide show.

No word spoken, I will let you guys be judge of the comparison photos I took.. Using the N82!!

And now my Grand Finale Set of shots which I had a lot of request from Howard Forum Members to post this comparison shots. 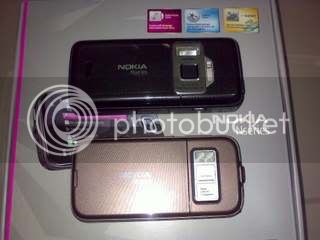 Conclusion: Nokia N82 Xenon Flash single handedly beat the 2 Led Flash on the Nokia N85. I don’t how many LED flash would it take to beat the single xenon flash. I just know for a fact that Xenon Flash is the way to go for Nokia to succeed on the Imaging Dept. I also think that Nokia should start implementing the Xenon flash to all its future Nseries Multimedia Devices.

So what do you guys think? Please feel free to comment..

Tune in for more updates coming up…